News & Media
You are here: Home1 / News & Media2 / Blog3 / Nissan faces pressure to recall Navara after dozens snap in half

Nissan faces pressure to recall Navara after dozens snap in half

Rust weakening to the chassis is so severe that dozens have snapped in two.

Worried Navara owners are left in the dark as up to 35,000 UK Navaras could be affected by chassis rust

Nissan Navara owners are urging Nissan to recall the UK’s best-selling 4 x 4 pick-up with claims that rust is seriously weakening the chassis and has caused a large number to snap in half.

Dozens have made complaints about the chassis rust and have accused Nissan of keeping the problem “under-wraps”.

The issue is reported to affect the Navara D40 model and some Pathfinder R51s, the seven-seater model but the Japanese car-maker is yet to make an official recall.

James Patterson of Bury, Manchester has a 2007 Pathfinder model with 85,000 miles on the clock.

He told GW: “I was made aware of the corrosion on the Navara chassis about two months ago but was told that it didn’t affect the pathfinder series.

“Apparently it does, so I looked underneath yesterday and the chassis crumbled in my hands.

“Now they’re (Nissan) saying that unless I have a full service history from Nissan, they will not pay out.”

Many other owners are also calling for answers.  The rust is so severe that the chassis has been known to fail altogether. Image: Facebook. 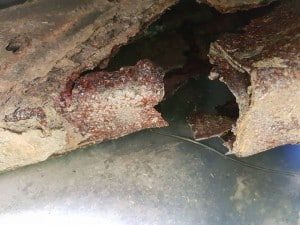 The rust is so severe that the chassis has been known to fail altogether. Image: Facebook.

Navara owner, Richy Holmes was towing a caravan with his wife and four-year-old daughter inside the car when the car snapped.

He told The Sun: “I was only going a few miles an hour.

“I dread to think what could’ve happened if I’d been going faster.

“It’s an absolute disgrace that these vehicles are still on the roads.”

The issue is to be raised in a Transport Select Committee meeting.

Committee member and Tory MP, Huw Merriman told The Sun: “To reassure the public, Nissan would be well advised to recall all affected vehicles.

“If, as they say, there are only a small amount impacted then it shouldn’t be a costly exercise in ensuring that these vehicles really are safe to be on the road.”Attwood Solicitors, a firm working on behalf of hundreds of owners in the UK, say up to 35,000 Navaras are affected in the UK and 193,500 worldwide.

However, Nissan has said the number of affected models is much smaller.

A Nissan statement to the MailOnline said: “We’re aware of the issue in a relatively small number of previous generation Navara’s (D40) and have taken action.

“We’ve put measures in place to quickly resolve the concerns of any customers who have contacted us about this.

“Nissan is backing customers even though the affected vehicles are up to 12-years-old.

“Depending on the age of the vehicle, these measures include a free and independent inspection of the vehicle where appropriate on older vehicles, if that inspection shows there’s an issue, we’ll do the right thing by the customer under our warranty and customer service policies.”

Auto Torque has partnered with Garage Wire to bring you all the latest aftermarket news.

Supporting your business with free resources and advice