Servicesure Autocentres, the UK’s fastest growing network of garages, has hit the bullseye by making its first venture into big-time darts.

The 47-year-old Scot, a World Championship finalist in 2014, won his first major title – the UK Open – earlier this month and is currently flying high in the Premier League.

The 12-month partnership was launched with a special event at The Parts Alliance head office in Solihull.

Wright, one of the sport’s most colourful characters and known as Snakebite to his legion of fans, said: “2017 has got off to a brilliant start for me by winning the UK Open and I’m hoping to keep that success going for the rest of the year. 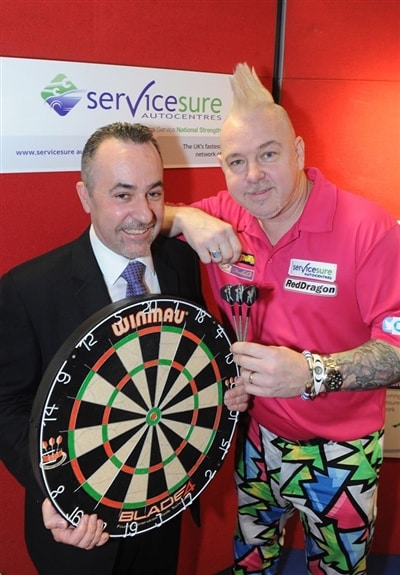 “I’m playing the best darts of my life at the moment and I’m thrilled to have the backing of Servicesure for what I hope will be an exciting period of my career.

“The Servicesure programme has a fantastic reputation in hundreds of garages across the UK and I’m very proud to be joining forces with such a successful brand.”

Wright will wear a Servicesure Autocentres logo on his shirt and become a brand ambassador, making personal appearances over the next year.

Paul Dineen, head of the Servicesure programme said: “Peter is one of the best and most popular darts players in the world and we are thrilled to be supporting him.

“Darts has seen a huge surge in popularity and millions of people in the UK either attend tournaments or watch them on Sky Sports, BBC or ITV every year.

“We pride our Servicesure programme on quality so we wanted a darts ambassador who fitted the same bill – and Peter certainly does that.”

The Servicesure programme currently has 420 garage members, up from 258 less than three years ago, and there are significant plans for further growth.

Offering more than 30 business services, Servicesure is committed to helping its garages deliver an exceptional standard of car care to motorists.

All Servicesure Autocentres are subject to a strict code of conduct, reinforced by The Motor Ombudsman, while motorists also benefit from an exclusive National Warranty which guarantees against parts and labour defects for 12 months or 12,000 miles at any Servicesure Autocentre in the UK.

Supporting your business with free resources and advice